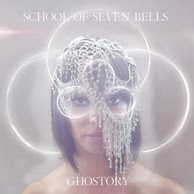 Once lost, momentum is often difficult to recover – a plight New York's School of Seven Bells are getting all too familiar with. While 2008 debut Alpinisms jetted the former three-piece into the stratosphere, its follow up, Disconnect From Desire, saw their status dip toward also-ran territory. Now a duo (sans Alejandra Deheza's identical twin, Claudia), album number three sees SVIIB once again struggling to regain the firm foothold of their initial offering.

Opener The Night sets the initial tone, radiating well-worn cathedral atmospherics that eventually worm their way into woozy, kaleidoscopic numbers like Lafaye and Reappear. But beyond this relatively pedestrian introduction lies more caustic thrills: Deheza’s otherworldly intone scythes through White Winds’ guitar-scarred torrent, while album swansong When You Sing is a relentless transient-pop triumph. A record of two parts, Ghostory isn’t the sound of a band regaining momentum so much as one still toiling to find it.
Posted by Billy at 20:40