At almost three centuries old and five to nine feet in length, the piano flies in the face of musical progress. In today’s world, grubby 16-year olds etch together sounds from the bowels of their bedrooms. It doesn’t matter what they play or how they play it, all they need is a knack for GarageBand and an ear for a bit-mapped beat.

There’s little room for the piano in this get-the-hits-out-quick blueprint. The music industry simply doesn’t have the time or money to create the optimum ambience for tinkling ivories. And, really, is there anyone in 2012 who has the attention it takes to coax wistful notes from this behemoth instrument?
Step forward, Jason Charles Beck. Aka, Chilly Gonzales.

Having worked his magic for Feist, Peaches, Daft Punk and, er, Steve Jobs, Gonzales’s mastery embraces a gamut of styles that runs from hip-hop to classical (sometimes at the same time). Yet, his first full length fling caressing the ebony and ivory keys, 2004’s Solo Piano, was a much-lauded revelation. Its instrumental laments took Gonzales beyond alternative audiences and hurtled him into more mature musical ears.

Eight years and one Guinness world record later, the Canadian enigma has plumped himself back on the stool, popped open the fallboard and recorded another batch of grand piano songs. Assembled from the rubble of hundreds of melodies, Solo Piano II is a natural, if more jaunty, follow up to its predecessor. These 14 cuts are classily sculpted; each delicate and nimble, entwining emotional notes and fluttering melodic jaunts.

Such meshing of ambience shapes Solo Piano II into a rewarding listen. Rather than compliment ‘Escher’s cascading keys, down-tempo numbers like ‘Minor Fantasy’ and ‘Redeaux Lunaires’ create a wave of intermingling peaks and troughs. Yet, Gonzales is streetwise enough to let his work live independently, with softer compositions like the bewitching ‘Evolving Blinds’ easing out engrossing melodic yarns.

At times this richness feels more suited to aristocratic lounge rooms, but there’s enough personality here to captivate a wider audience. Nodes of candle-lit tenderness leap from the tearful swells of ‘Othello’; a smokescreen of fidgety key strokes disguises the heart-breaking tenderness of ’Epigram in E’; while hints of charming cheek lies in ‘Nero’s Nocturine’s dainty and familiar tune.

Recorded over ten days in Paris’ Studio Pigalle, Solo Piano II’s classical leanings and modernistic execution are testament to the piano’s ever-lasting ability to dazzle the masses. And with it, Gonzales proves once again that makeshift beats and bleeps are little match for his extraordinary craft.
Posted by Billy at 09:21 No comments:

Predicting the Dirty Projectors’ next step is a pointless task. Led by idiosyncratic frontman David Longstreth, the Brooklyn-based quintet explore rock's more challenging catacombs, often teetering on the verge of prog. But this tendency to experiment is, almost always, infused with an easy sense of melody that opens up awkward affairs like 2009’s gorgeous Bitte Orca.

In this vein, album number six  is possibly the Projectors’ most accessible. Masterful cuts like Just From Chevron and the string-bleeding About To Die are still laced with pirouetting time signatures and matadorial guitars, but there’s a creamier feel to their delivery. Built entirely to mesmerise, Gun Has No Trigger’s hypnotic mist and the shimmering chimes of Impregnable Question are symptomatic of the album’s gentile, yet intricate nature. Smooth and simple, Swing Lo Magellan has the makings of another Dirty Projectors classic. How utterly predictable.
Posted by Billy at 09:20 No comments: 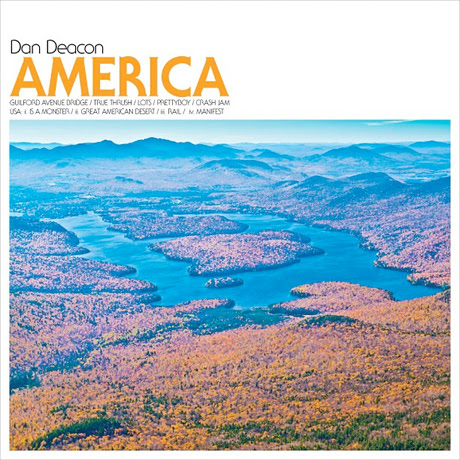 America by name, America by nature. Dan Deacon's follow-up to his 2009 career high Bromst is swathed in the big, bold and sometimes graceless chutzpah of the country it was created in. But these brainbox battering beats are as much an examination of the Baltimore-based composer’s sonic progression as a delve into what motivates the United States of America's inner psyche.

On the face of it, little's changed in the land of Deacon. The hyper-driven distortion of Guildford Avenue and Crash Jam are as euphoric and ear-screeching as anything found within his extensive back catalogue. But beneath this maximalist exterior lies an understated romantic streak that weaves its way through the tingling gaze of The Great American Desert and Rails' parping trumpets, climaxing in True Thrush's melting android melody and hexagonal drum patterns. A triumph, for sure – America is perhaps more vast and complex than even Deacon had anticipated.
Posted by Billy at 09:14 No comments: 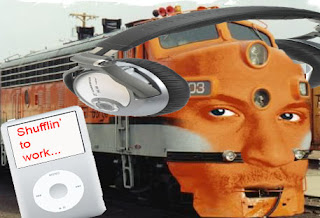 Over the past few weeks I’ve been setting my iPod to shuffle on my way to work. Admittedly, this doesn’t have anything to do with trying to explore my bulging and mostly unlistened to MP4 collection, it’s really because I’ve been finding it more and more difficult to pick an album out for the half hour or so journey. Shuffle just seemed the easiest solution.

Now, a few moons ago my good friend Euan (who writes this lovely little blog) did at one point document his shuffle journey to and from work. I don’t think he’s still doing it, which is a shame as it was a good insight into what’s on his stereo. So,  I thought I’d appropriate his idea (sorry) and occasionally start to lay down what randomly infiltrates my lugholes on my way to work.

The rules here are simple: write a couple of sentences about the track that appears on my shuffle before said ditty disappears back into the gaping 7,000+ song void that is my iPod. Also, I can only write about the tracks from the moment the train leaves the sattions and arrives at my destination. So, it could be a long, long article depending on Network Rail’s competency.

Now before I start - as something of a pre-emptive disclaimer for some of what's about to appear here -  I have to declar that I’ve been working as a music journo for about seven years and there is definitely a lot of shite that I’ve barely bothered to listen to still lurking in the dark, dank depths of my iPod. So, some of this tunesmithery is not there of my own accord. Although some of it is – for which I make no apologies. Well, maybe a few.

Yeasayer – Ambling Alp (instrumental)
A bulbous, bouncing bass and ski-slope tumbling drums slosh together around my eardrums, while a persistent synth-line worms and wiggles across this jungle canvas. Doesn’t even miss the vocals. An ebullient, and rather hopeful start

Tune-Yards – Little Tiger
My, my, mt, isn’t this an awkward, cranky, dirty, melancholic, lo-fi thrum? It’s like the personal score for a wind-up ballerina from the wrong side of a New York crackhouse. Eerie, is probably the word.

Primal Scream – Struttin’
Hmm… this takes me back. Primal Scream’s blues-rock-schtick might have tickled my 15 year-old self, but this Hammond-heavy, funk-gunk wig out has a tame, laboured feel to it. Given the amount of pharmaceuticals Bobby G and co packed in their personage at the time, it’s a toothless, edgeless bore.

When Saints Go Machine – Fail Forever
Woah. I forgot about this. What. A. Track. A buzzing, tectonic roll of synths and strings, it washes out on an ice-cool motorwaying aesthetic that nods it's head to the effortless minimalism of Pantha Du Prince.

John Maus – Streetlight
An airy, feathering fug of 80s keyboards and echoic vocal simplicity that’s dichotomous enough to shiver spines and move feet. This is Maus at his genius best.

Deerhoof – Rrrrrrright
Blam. Blam. Brrrrrp. Brrrrrp. This is as demented, childish and jaw-droppingly ferocious as you’d expect. The only lyrics I can make out behind the din of the train seem to be “eclectic melodies, popping out our hairy bits.” I hope, hope, hope I’ve heard that right.
Broken Mirrors – Chromatics
It’s taken me a while to “get” this Chromatics record, but “get” it I now do. Yet if this this brooding, elongated, spacious epic had been my introduction I’m not sure I would have bothered trying. Dull as fuck.

Otis Redding - A Home in Your Heart
This is gorgeous. Old-school, hip-jiving soul resplendent with parping brass, shotgun percussing and a golden guitar line, topped of by the gravelly pipes of Otis. Amazing.

R.E.M. – Romance
I forget just how “indie” R.E.M were in the beginning. This breezy, jangle-pop number is not Stipe et al their finest, but it’s a touchstone for the jaunty, non-aggravational direction the band took in the 90s.

Real Estate - Younger Than Yesterday
Just what you need on a sunny morning on the way to Chelmsford. A melting, slow-burning affair led by languid guitar chimes and bleary-eyed vocals. Reminds me of why I took such a shine to Real Estate in the first place (that second album really wasn’t up to scractch though).

Train arrives in Chelmsford at 8:50am
Posted by Billy at 12:14 No comments: