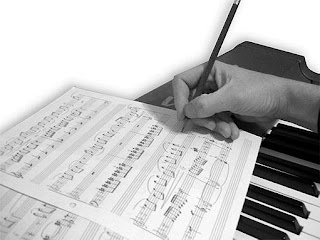 (1) Radiohead is both a sacred sheep and a cash cow

(2) James Brown is not the Godfather of Soul

(3) Palms are crossed with silver; words are not

(4) The NME is universally slated, yet everyone secretly admires it

(5) No one cares about consistency, style or grammar

(6) The Fall are better than you think

(7) Bands are not as clever as journalists make you believe

(8) Journalists are not as clever as words make you believe

(10) Every good question has been asked before, as has every bad one.
Posted by Billy Hamilton at 01:11 2 comments: 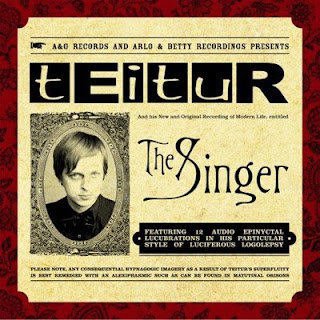 For some, the voice of Teitur Lassen is a grandiose pleasure that hypnotises the eardrums. Yet, for others, his lavender scented tones are as grating as a hangnail on a blackboard. And once the Faeroese singer-songwriter opens up his well-oiled throat you’ll know exactly why: there’s truly no middle ground when it comes to this man’s piercing pipes. But his music? Well, that’s an entirely different matter.

Rich with tenderised symphonies and dashing yarns, his fourth studio LP The Singer is an angelic, prose-heavy effort that can catch the breath with whispered brilliance, yet readily strikes out with stolid flutters of languid, directionless toils. It’s not a torturous affair; merely a frustrating one, destined to gnaw away at the frayed strands of the patience. If ever a record was made for casting a browsing thumb over the ‘Next’ button this is it.

The title-track’s introductory welcome bear testament to such laboured listening. An operatic plead of fine-tuned a cappella, it’s the type of elitist melodrama Freddie Mercury treadmilled at the bookend of his recording career. Narrated by narcissistic chords and self-aggrandising flashes of brass, there’s simply no give to vicariously whined couplets like “I sing about my loneliness and in return they thank me/ I had never meant to be a singer.”

This penchant for self-indulgence shepherds the record into a cluster of nadirs; be it the spiritless fan-boy reminiscing of ‘The Legendary Afterparty’, ‘Guilt By Association’’s laboured Bright Eyes-aping or the monochromatic dripping of ‘Letter From Alex’. Sure, each is a chest-puffing composition bulging with atmosphere, but these quarrelsome tribulations could only resonate with a hermetic teenager’s persecuted mindset.

Fortunately, Lassen encounters greater success when the tempo turns brisk; infusing a positivist feel through his bleak lyrical undercurrent. The Mexicana parps and deep dwelling bass of ‘Girl I Don’t Know’ carry his inclining crow skyward on a canvas of affective melody, while ‘Catherine The Waitress” boisterous rhythm is supplemented by the sort of jangle-happy toe-tapping Stuart Murdoch regularly dusts down his tweeds for.

A hybrid of Lassen’s dual musical predilections, ‘Start Wasting My Time’ juxtaposes tepid verses with a buoyant chorus section that saunters to the rhythmic sway of cocksure percussion and prickling guitar. It’s an extravagant swoosh that perches above much of the record’s all-consuming dreariness, proving this softly worded balladeer has the dexterity to fabricate something more gratifying than a sprawl of diluted arrangements.

While such sporadic flashes veer brilliantly off-kilter, The Singer’s one-geared nature is the making of a man who’s more than happy to play it safe. His voice may fissure opinion, but when it comes to the music Teitur Lassen takes it straight down the middle of the road.
Posted by Billy Hamilton at 11:07 1 comment:

This is the transcript of an interview I recently did with Ben Curtis of the rather magnificent School Of Seven Bells for The Skinny. An amiable, pleasant sort of fella, Ben talked frankly about escaping from old ensemble Secret Machines, his new band’s recent record and the two ladies who’ve put a rather large smile on his face... 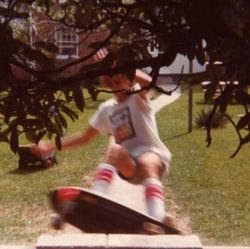 As one man bands go, Wavves is up there with the loudest. San Diego slacker Nathan Williams’ almost-eponymously titled (check the extra 'v') sophomore LP may not allure those of sensitive eardrums, but for everyone else it’s half an hour of rapacious, temple-pounding sonics.

By swilling together fuzzy clutters of guitar and percussion with swooshing melody, Williams' annexes depth and dimension to Times New Viking's 2-D blueprint of N-O-I-S-E; adding sensitive, humane flushes to the trash punk decibels and skeletal riffs of Get In The Sun and So Bored. Record highlight is the chronic dirtbox scuzz of No Hope Kids, yet more chasmal cuts like the coruscating Killr Punx, Scary Dem or the infested lair of drum that is Sun Opens My Eyes suggest Williams has both the scope and range to escalate beyond these myopic throes. Not quite a masterpiece then, but pretty soon these Wavves will come crashing in.
Posted by Billy Hamilton at 23:06 No comments: 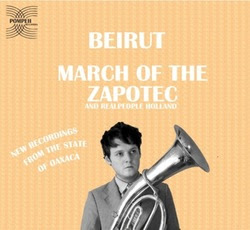 Up until now, Zachary Condon's never been one to do things by halves. Abound with voluptuous mariachi sways and waltzing European melodies, previous Beirut releases were unrepentant stomps that left no doubt as to their creator's stoic intentions. March Of The Zapotec/Realpeople:Holland is an entirely different proposition.

Part one of this dichotomous affair finds Condon mounting the uncultivated, if familiar, climes of Mexicana folk; where triumphant, parping brass exhales over rippling percussion and mandolin while he warbles staunchly against these gales of instrumentation. By part two he’s crept into the unknown: the synthesised world of glitchy electronica. Disappointingly this new domain fails to fan his creative sensibilities, with No Dice and My Night With The Prostitute From Marseille resembling tiresome Hot Chip cast-offs- less dancefloor filler, more lughole chiller. He may have got half way there but, for once, Monsieur Condon misses out on the whole shebang.
Posted by Billy Hamilton at 23:02 No comments: 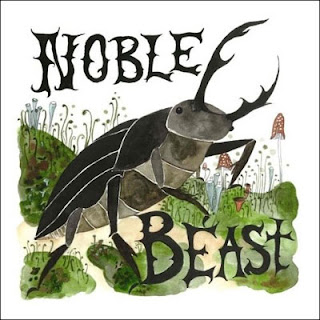 Andrew Bird’s always been a bit of a mystery. Capable of delivering both oddball verbosity and tailored elegance in one fell swoop, the Chicago-born troubadour cuts a nomadic figure when traipsing through the industry’s unruly queue of PR skirt-chasing. Yet he consistently produces the sort of ditties slobbering A&R toads sodden their tighty-whities over: innovative, consuming melodies with the dexterity to moisten tear-ducts or flutter the strings of the soul. A sure-fire cash cow in many worlds. Not Andrew Bird’s.

You see, his senses are swayed by more extraordinary pleasures; be they Weather System’s neo-jazz swings [2003], the esoteric monologues of The Mysterious Production Of Eggs [2005] or Armchair Apocrypha’s [2007] pensive collusion with science. Whatever the guise, his typicality has always been untypical of us, the everyday punter. While we steadily progress on our linear, predefined routes, Bird’s pathway zigs, zags, pirouettes and rotates before reaching its destination, armed with the allure of both story and song.

Weighing in at six-minutes shy of an hour, Bird’s fourth studio album, Noble Beast, should feel more journeyed than the shorter endeavours folded away in his, now bulging, archive. Instead it’s lighter, daintier even; as if shorn of responsibility and obstruction. The quilt of melody upon which his crooning tones once laid have been replaced by a brittle, straw packed under-sheet that takes time to embrace but, after a few restless nights of tossing and turning, grows as a soothing comforter for the soul.

Introduced by the pursed-lip blows of Bird’s familiar meandering whistle, inaugural number ‘Oh No‘ begins with a massaging palm of string and drum. Arrangement-wise, it’s characteristic of the man’s past glories- swooning, bulbous chorus preluded by slinky violin fanfares - yet, such is the willingness of tone, it rubberstamps a definite shunt forward in expressionism, even if a curious glee is induced by his pledges of being at one with “the harmless sociopaths”.

Delivering on this early promise, the advancing numbers of Noble Beast congregate as an organic array of tune that beams beyond Armchair Apocrypha’s dense aural midst. The touching ‘Masterswarm’ sets out with a slowburning contortion of brittle fret plucks before sparking kinetically into blizzards of instrumentation and diction. Likewise, doom-laden canticle ‘Effigy’ arrives under cloaked fiddle strains, slowly unravelling as a purposeful sway that has Bird agonising over his own insularity.

Of course, the linguistic acrobatics remain as impressive as ever; his recital of tongue-knotting stanzas during ‘Tenuousness’’s harpsichordal flurry is executed with such rapidity they hum like a voluptuous musical accompaniment. But this is not a habitual collection of inner-monologues scattered bare across fully developed euphonies - there’s less bafflement to these tales. The mesmerising ‘Anonanimal’ may be rife with dramatic vicissitudes of guitar, drum and key, but his words are non-conflicted and the production bleeds purity. It’s the sound of a man coming to terms with the contours of his own skin.

Yet, Noble Beast is not without flaw. In fact, imperfections are bruised across the record’s spine like blows from a cracked whip. The laboured ‘Fitz & Dizzyspell’s conduces heavy eyelids with its dreary, poker-faced gushing; ‘Nomenclature’’s cumbersome strains leave its final crescendo blunt and withered, failing to emerge from the tedious slipstream; and ‘Natural Disaster’’s creeping strings and arid backdrop do little to rescue what is, in essence, an undeveloped, shovelled-up lament.

Sadly, these lulls rein in an album threatening to take flight with two cuts that prove Bird’s lost none of his idiosyncratic mastery. ‘Not A Robot, But A Ghost’’s twitching, saw-buzzard backdrop transcends into a thrill of experimentation, with glorious robotic Tropicalia glazed atop the grimy canvas of looping, gyrating effects. A startling moment, for sure, but it’s surpassed by the magnificent ‘Souverain’. Easing in with a mournful Spaghetti Western whistle, it develops as a hopelessly contradictory ballad - both downbeat and lustful - that swells with orchestrated hooks and ponderous wordplay.

Perfectly poised, this elegant, heart-pumping climax brings an often luscious, sometimes languid, record to a fitting conclusion. Far from refuting suggestions of esoteric sauntering, Noble Beast’s quirky trove lends itself to a man playing ball in an entirely different court; one without structure, boundary or cash-money ambition. But, hey, you know Andrew Bird - he wouldn’t have it any other way.
Posted by Billy Hamilton at 22:59 No comments: