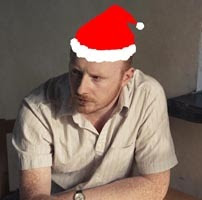 As the battle for Christmas Number One heats up with the ferocity of a yuletide fire, it’s surprising to find scrooge-like miser Malcolm Middleton still shovelling his coals onto the blaze. With under three weeks to the announcement of who’ll be sitting pretty on a tree decorated with the likes of Sean The Sheep, Sugababes and - more than likely - X-Factor’s very own electric-shocked operatic action-man Rhyddian, the thought of a ginger-mopped ex-Arab Strapper climbing atop such illustruously tinsled branches makes for a winter’s tale as cockle warming as Dickens’ Christmas Carol.
Now, we all know he’s got nae chance of winning - the brusque, militant marketing of Simon Cowell’s all-consuming pop behemoth ensures this coarse and timorous Falkirk-born beastie will have to make do with crumbs from the table of this festive feast - but just to witness a song laden with proclamations of loneliness and death mingle amongst the typical jovial tripe spouted out by Santa-hat adorning imbeciles is, well, a Christmas miracle in itself. Because lets face it, this time of year is full of fabricated shite and as the office party season swings into a vomit-inducing climax it’s reassuring to know that amidst an ever-present soirée of Wham and Slade records big Malcy is lurking; waiting for his moment to dim the fairy lights and pull out the knives.
Despite being ushered into a rammed - but apparently not sold out - venue like a plateful of pigs in blankets, there’s a buoyant atmosphere exuding from the punters at Liquid Rooms tonight by the time this reticent Xmas underdog takes to the stage. Backed by a four-piece band that includes the pristine purr of Strike The Colours’ immaculately presented Jenny Reeve, Middleton etches himself immediately into a triumvate of agoraphobic, acoustically led lilts that glisten to a fully blossomed frisk of percussion and keys. It’s a spellbound introduction that culminates in the brittle, hopelessness of ’Four Cigarettes’; a track where Malcolm’s laconic brogue is so awkwardly honest it’s as though he’s stripped himself bare under the bashful gaze of a room full of strangers.
What’s most apparent from his captivating performance is that for all the accusations of pessimistic lachrymosity, Middleton percolates an innate sense of sanguinity throughout his songs; juxtaposing the mournful lyrical repines of ’My Loneliness Shines’ and ’Break My Heart’ against sweeping backdrops lavished with Reeve’s scrumptious vanilla-scented harmonies and a scurrying bluster of deep-filled bass, drum and piano twinkles. Performed live, tracks like the infectiously uplifting ’A Brighter Beat’ are a bold attestation to Middleton development as a solo artist and perhaps an indication to how he’s progressed emotionally through the years. Rather than hiding coyly behind a guitar as was once his predilection, this fragile troubadour is now happy to take centre-stage while a jostling arrangement of melody swivels past his eardrums and out into the crowd below.
His new-found confidence is best exemplified during Christmas Number One-hankering new single ’We’re All Gonna Die’. Riotously received, the track ambushes the venue with a transient dash of synths directed by Malcolm’s stern proclamations of a lonely, possession-less death. On record it amounts to little more than a sprightly, if underwhelming, baptism to his more positivist third long player but here tonight its message suddenly clicks into place as Middleton piously barks out: “We’re all one in a million, we’re alive, we existed, we took part in the game”. Fuck the excruciating self-congratulating flippancy exuding from Xmas tunes of old, this is what we should be teaching the world this year – stick that in your pipe Sir Cliff, Noddy and all you other Christmas-raping mercenaries.
This boisterous and unexpectedly ebullient set is brought to a rapturous end with Jenny Reeve’s flighty vocals duelling fiercely with Malcolm’s dour-faced drawl on the mesmeric ’Fight Like The Night’ before gushing into ’A Happy Medium’’s looping choleric finale. Leaving the stage to an ardent cacophony of whoops and cheers, Malcolm Middleton may not be everyone’s idea of a perfect yuletide treat but after this performance there’s no doubting who tonight’s crowd wants to see *cough* sleigh the charts this Christmas.
Rating: 8/10
Posted by Billy Hamilton at 16:09 3 comments: 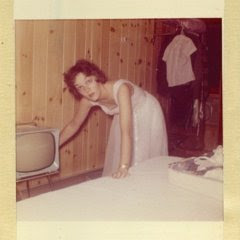 Admittedly, geography’s never been my strong point. I can sketchily work out the position of London on a map but ask me to identify exactly where Birmingham or Derby reside in Blighty’s rich topography and you’d be just as well blindfolding my peepers and allowing me to pin a tail on the derrière of some poor horse-like creature. So you can imagine the befuddlement stewing away within my aching cranium when I discovered Manchester Orchestra were not natives of the North-West’s most thriving musical city. Nope, apparently there’s another Manchester in another country – in fact, there’s a shit load of them. They don’t teach you that at High School that’s for sure.
Yet despite my perplexed grimaces over such locational conundrums, it’s the sound of this peaky Atlanta-based quintet’s debut LP ‘I'm Like A Virgin Losing A Child’ that ruffles the frayed, alcohol ravaged nerve cells of my grey matter most. Y’see, this is a record that skates finely over the crease between conquistadorial melodic majesty and chart-teasing teen-rawk insipidity; a record that unleashes moments of sweeping cacophonous glory before swiftly precipitating into punchless riffs enveloped in a haze of seamless, sterile production. And it’s such infuriating directionless that ultimately ebbs away at the impact of this emotionally transparent affair.
Opener ‘Wolves At Night’ begins sprightly enough with its swollen harmonic bulge striding to incongruent drum lurches and jingling guitar strums before breezing into a glorious virulent chorus led by Andy Hull’s affected crow. But it’s the frontman’s penchant for displaying his vocal dexterity that eventually chaperone’s I'm Like A Virgin.. on to treacherous pathways as he shuffles irksomely into whiny Brian Molko-esque mews throughout ‘Now That You’re Home’’s stop-start evangelical throb and the laborious, grating melancholy of ‘I Can Barely Move’. The bleary-eyed coagulation of brooding synths and rhythmic pounding perspiring from ‘Where Have You Been’’s damp, insular cauldron undoubtedly compliments Hull’s scarred lung-puncturing but much of the record finds him recreating the pitiful tones of a tortured artiste who’s unwittingly found himself spearheading a disjointed Counting Crows tribute act.
Surprisingly, for an album so engulfed with ponderous rock anthems, it’s the frail, pensive laments of ‘I Can Feel Your Pain’ and ‘Don’t Let Them See You Cry' that glimmer brightest. Stirring heartstrings with the mousey breathlessness of a brusque Conor Oberst, Hull’s new found impregnated whisper crackles tenderly over ghostly landscapes of simple acoustic scratching that alleviates the snooze-driven dreariness emitting from ‘Golden Ticket’’s formulaic Hold Steady-aping. Yet such cloud-peering heights are rarely maintained and achingly obvious record closer Colly Strings draws the curtain strings back into order with a climax that’s meeker than a cumbersome knee-trembler in your in-laws’ spare room.

They may not hail from ‘The Capital Of The North’ but on the basis of I'm Like A Virgin Losing A Child’s tepid offerings it seems Manchester Orchestra have the city’s gloomy skyline down to a tee.
Rating: 5/10
Released on 3 Dec through Columbia Records
Posted by Billy Hamilton at 11:14 No comments: