Cor, that’s January almost done then. Where the hell did it go? Not that I’m complaining, mind. This shitty weather is not particularly uplifting.

Anyway, I feel like I’ve been listening to and writing a tonne about new music lately. January, for all it’s ills, is not a bad month to spend time indoors getting your lugs wrapped around the first crop of albums in 2013.

My track of the month is Teleman’s rather wonderful Cristina. I’ve had it in my head since I first heard it at the turn of the year and I can’t see it going anywhere quick. Finally my penchant for the braw Pete and the Pirates has new outlet.

Album-wise, I’d have to say the best thing I’ve heard so far this year is the L. Pierre record, which probably won’t suit everyone’s tastes, but it includes some of Aidan Moffat's finest work, post-Arab Strap.

I am definitely finding myself being swayed, quite surprisingly, by the Dutch Uncles and Everything, Everything LPs. With all these math-pop ensembles, Manchester seems to be having a bit of an identity refresh at the moment. Which I guess is no bad thing.

Anyway, here’s a taster of the (new) tunes that have been spinning around my head this month…

If someone was to put together a line-up of underappreciated acts from the past decade, The Ruby Suns would surely head the queue. Band foreman Ryan McPhun’s first three full length releases encapsulated a swathe of genres, played out with a sense of fidgety, untameable curiosity. In particular, the unkempt Amazonian rhythms of 2007’s Fight Softly showcased a mastery of percussive-based melodies which, live, was made all the more hypnotic by McPhun’s limb-combusting stage presence.

Yet, there’s always been a touch of the Yeasayers about The Ruby Suns. Not just in the shared pursuit of tribal splurges with a melodic twist, but in the feeling that this is as good as it gets; that wherever McPhun goes next, no matter how spectacular the execution or boundary-pushing the sound, he’ll never quite scale the greatest heights.

With the release of Christopher, McPhun seems to be using this sense of inevitability to his advantage. Bathed in high-fidelity production (thanks to Beach House mix-maestro Chris Coady) The Ruby Suns' fourth longplayer gallops away from its predecessors’ calling card of experimental flicks, tricks and flourishes. Here, McPhun is putting away his blueprints and doing as he pleases. And what he pleases is pop - of all shapes and sizes.

His latest creation is a Ruby Suns record in name only. Everything else – the sounds, the hooks, the synthesized delivery – derives from chart-topping produce from the last 30 years. Unsurprisingly, this pegboard style creates an uneven trajectory, meaning the run between opening number ‘Desert of Pop’ and curtain closer ‘Heart Attack’ has more peaks and troughs than an alpine ski resort.

Such inconsistency makes Christoper a frustrating listen. The spirographing Eighties wiggle of ‘Real Life’ is instantly countered by ‘Dramatikk’s directionless composure; ‘Rush’s overjoyed synth-scape finds itself clawed back by the placid austerity of ‘Kingfisher Call Me’; and the spiderwebbing rhythm of ‘Starlight’ is left sullied by ‘Boy’s suffocating Chromatics-like tundra.

Curiously, McPhun’s sonic shunt evokes a more honest lyrical approach from the New Zealander. These tracks are washed in personal narratives, ranging from surface level popstar pondering (‘Real Life’) to deep-seated soul searching (‘Heart Attack’). At one point 'Boy', perhaps the record’s most blunt point of reflection, finds McPhun explaining to his inner-child that “there’s a monster in everyone you know”.

Despite the self-therapy and tonal lulls, Christopher is a highly listenable affair that produces two truly outstanding moments. ‘Desert of Pop’s vibrant synths and dreamy, sentimental notes make it a dead-ringer for New Order at their finest, while ‘Jump In’s grandiose scales and dashing percussion conjure up a brilliant slab of zig-zagging pop that’s as hummable as it is demanding.

Were they delivered via the sugar-coated pipes of a giggly chanteuse, such impressive touchpoints would scythe their way through the charts. Yet, for all Christopher’s shiny veneer, you suspect McPhun has no need for such lofty heights. He’s satisfied doing what he’s doing, playing what he’s playing, being what he’s being. Appreciation doesn’t even come into it.

First published here for Drowned in Sound
Posted by Billy at 15:23 No comments: 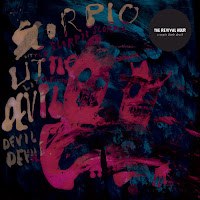 To make any sense of The Revival Hour’s debut LP Scorpio Little Devil, it’s necessary to understand the commonality that binds its creators. Born either side of the Atlantic, DM Stith and John-Mark Lapham, formerly of Manchester’s The Earlies, are both gay men who were brought up in stern – if very different - religious communities. It’s unsurprising then to find their first full-length collaboration strongly bedded with themes of escapism and alienation.

Despite the deep-seated subject matter a sense of adventurism runs across the record’s spine. Fusing together a kaleidoscope of genres, the duo’s ability to switch skins is absorbing. Opener Control is a skittering, effects-riddled hailstorm; the harrowing Hold Back swoons with brass and gospel choir harmonies; and Run Away’s sunkissed pop skips away like a sugar-rushing Animal Collective. A never-ending treasure trove of ideas, Scorpio Little Devil is the sound of two remarkable minds becoming one.

First published here for The Skinny
Posted by Billy at 21:44 No comments: 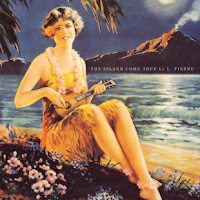 Who exactly is Aidan John Moffat?

Well, one look at the late night mutterings of his Twitter feed suggests we’re talking about an alcohol-sodden deviant with a penchant for slinky bubblegum pop princesses. A subsequent rumble through his recordings with Arab Strap wouldn’t entirely contradict this suspicion (see the deliciously depraved 'Stink' for proof). But don’t be fooled - the 39-year-old Scot has much more to offer than coital claptrap on digital platforms.

See, behind the misanthropic dirtbag front lies an artist of genuine class. He may ham up the Bukowski-for-a-modern-age swagger but there’s real substance to his output, as proven by 2011’s much lauded collaboration with Bill Wells on Everything’s Getting Older. His work under the guise of L Pierre is another touchstone for artistic merit. The comedown haze of 2002’s Hypnogogia and Touchpool’s louche jazz bar leanings suggest Moffat’s musical thirst is as insatiable as his libido.

Returning to the L Pierre moniker, Moffat has crafted new LP The Island Come True through a platter of scratching environmental recordings and samples pulled from age-old tape reels. In essence, it’s a step in to simplicity for someone who was never been overly complicated. And, somehow, amidst this jumble of hissing, spitting, creaking arrangements, Moffat has composed one of his finest and most abstract records to date.

It’s hard not to think of these 11 cuts as anything but a journey; one that starts at the feedback crackle of ‘KAB 1340’ and ends on ‘The Kingdom’s ethereal day-breaking drone. Between these two points, Moffat saunters through an ever-moving landscape of sounds and themes that segue effortlessly into one engrossing whole. Yet, individually, each track packs enough punch to stand up on its own right.

Emotionally, it’s as striking as Moffat’s ever been. And given his lack of lyrical input here, that’s an impressive feat. ‘Drums’s battering-ram percussion seethes with an anger that surpasses his most spiteful Strap moments. Its follow-up, ‘Sad Laugh’, is a doomy slow-dance of tender strings and indecipherable chants, while the piano-waltzing ‘Exits’ teases out a dreamy, romantic side that bears little of Moffat’s debauched tendencies. Even ‘Dumbum’s ever-looping skit suggests there’s a coy inner child in there begging to make an appearance.

Such latent multi-sourcing is, of course, open to interpretation – and its creator isn’t beyond firing out a mischievous curveball or two. But with such an imaginative cauldron of ideas, it would be foolish to pass this off as another exercise in Moffat-coined story weaving. Instead, The Island Come True might be as close as we’ll get to understanding the inner-workings of this perplexing and unique artist. Then again it might not. With Aidan John Moffat you just never know.

First published here for Drowned in Sound
Posted by Billy at 21:37 No comments: 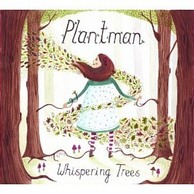 Close your eyes during Plantman’s debut album and you’ll be transported back to an era of pre-Britpop Indie. Given Matt Randall’s (AKA Plantman) love of Go-Betweens, Sebadoh and Durutti Column, it’s hardly surprising Whispering Trees sounds like it’s been pulled straight out of the NME’s fabled C86 mixtape. But in a decade where over-production thrives, there’s a refreshing lack of polish to this unhurried affair.

Although there’s little instant gratification to be found, tracks like the shimmering Away With The Sun and picturesque Stickman are quiet, unassuming earworms worthy of gradual pursuit. Equally impressive is the title track’s haze of trebly, mid-paced guitars and the ghostly chords of album highpoint Lunaria, both of which bare uncanny resemblance to Lou Barlow at his most introspective. At 15 tracks long, Whispering Trees could benefit from a little fat trimming, but this is still a fine reminder of uncomplicated times.

First published here for The Skinny
Posted by Billy at 21:34 No comments:

Goodbye 2012, hello 2013. It's hard to believe that we're starting a new year all over again, isn't it? The last 12 months seem to have flown in and, I dare say, the next 12 will do the same. Hopefully this will be a year that's got a little more stability to it than last year. There seemed to be so much tumult until I left London for Essex that it was difficult to keep our feet on the ground. After that though, it was strangely - and rather worryingly - plain sailing.

Anyway, I've not made any resolutions this year. I've been eating healthier, drinking less and exercising more over the last few months so I can't see me having to improve in those departments. On the "real" work front, I'll be spending much of the next year adding a few strings to the bow that is my CV before I consider taking the next step up. On the "unreal" work front, I'm planning on extending my writing opportunities and making time for an outlet that's both creative and cathartic for me.

Now we've got that out of the way, here's a few snapshots of my last few weeks of celebrating my birthday, Christmas and New Year. Needless to say, I'll be putting in a few extra miles when pounding pavementsover the next few weeks to work off some of the gluttony. 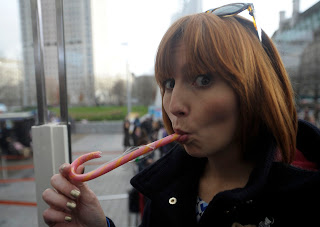 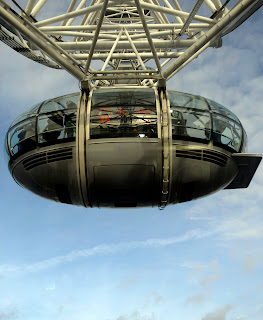 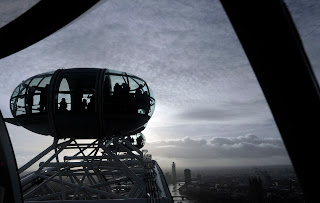 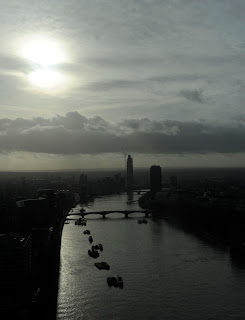 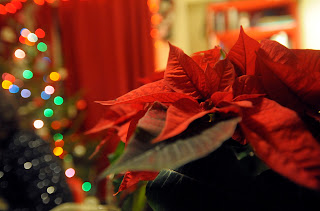 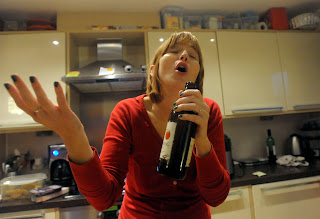 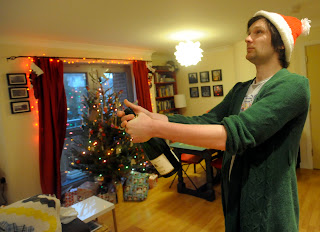 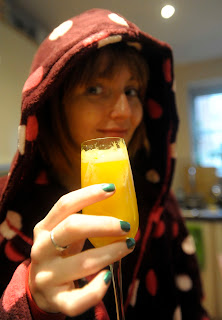 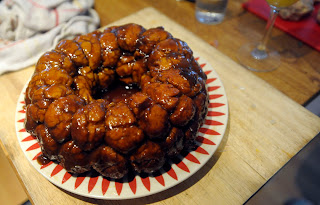 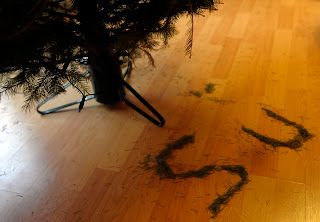 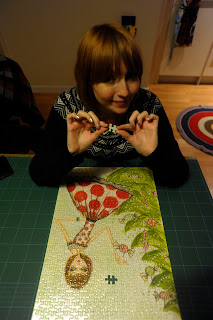 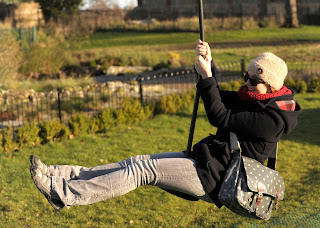 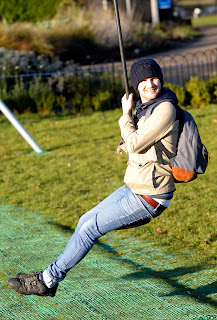 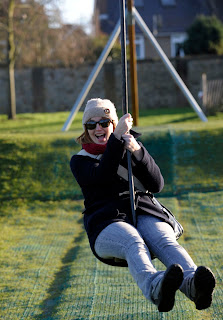 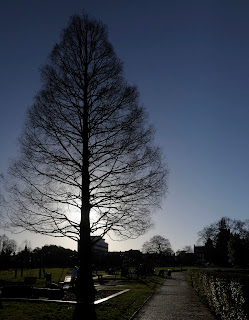