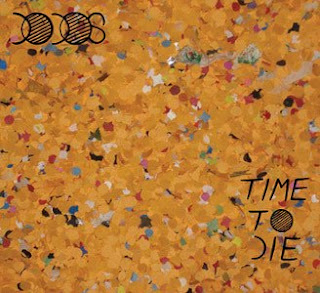 Second album syndrome shouldn’t affect The Dodos’ latest LP - Time to Die is actually the San Francisco outfit’s third studio recording. Yet, the follow up to last year’s alt. folk masterstroke Vister retains the feel of a ‘difficult’ sophomore. The high-brow production that varnishes creeping opener Small Deaths sets the stall for what’s to follow, shunting the focus from earth-bound melodies to studio-savvy trickery. This change in direction will disappoint those anticipating Visiter Mk. II, but the intricate layers of rhythm buried under The Strums and record highlight Two Medicines suggest the two-cum-three piece have a weightier armoury than first thought. Much of this new-found backbone belongs to the percussive strides of Logan Koeder; his measured skinsmanship wilfully transforming the meandering Troll Nacht into a purposeful cut fit for any ear canal. Sure, there’s enough rope to commit commercial suicide, but given the title perhaps that was the intention.
Posted by Billy Hamilton at 21:48 No comments: 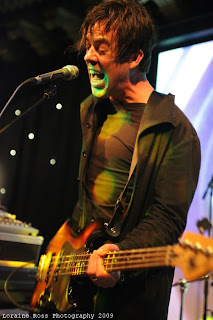 Quietly supping beer on a sun-drenched Edinburgh afternoon, Ted Koterwas is curiously relaxed company. Elegantly spoken, his courteous demeanour makes it almost impossible to believe he’s the creative force behind The Foundling Wheel’s decibel-notching racket. In fact, so stark is the contrast between this daytime persona and his writhing stage-bound contractions, The Skinny’s beginning to question whether he suffers from an unchecked strain of rock star bi-polarity.

“Having an outlet for rage is something I need,” explains Koterwas with a flash of gnashers that belies the sentiment. “It’s a Jekyll and Hyde thing. I need an outlet, but I put it into something that’s productive rather than destructive. Being aggressive is satisfying and I want that chaos around me in music, so it’s going to happen regardless.”

Born in Arizona, Koterwas spent his youth shadowing his military engineer father; hopscotching around New York, Kansas, Panama, Virginia, and Colorado before eventually settling in San Francisco. As a privately trained percussionist, his schoolboy heart was sold on the concrete career path of a life in the studio but, boys being boys, those good intentions were quickly swayed by punk’s lurid advances and Koterwas’s incurable appetite for noise.

“There were a lot of experimental bands in San Francisco and that stirred my interest,” he says. “I’ve always been interested in the idea of bands who were, at one time, very much on the edge and are now considered mainstream. There’s a real desire on my part to be noisier than what is acceptable. I want to be pushing harder than what’s out there.”

After relocating to Edinburgh three years ago, Koterwas immediately sought out the periphery he craved, scouring Auld Reekie’s dank hovels for like-minded souls. But, as a one man blister of bit-crushed bass, candy-wrapped melody and merciless drumbeat, The Foundling Wheel eased into the city’s feather quilted alt-folk scene with the subtlety of a torpedo to the anus. Unsurprisingly, the settling-in period was far from smooth:

“Looking back on it I could have done more research into the scene, but instead I just went out a lot to try and find music I could relate to,” he concedes. “I found that there was a fairly hardcore experimental/improvisational noise scene and there was an indie scene but there wasn’t much that crossed over. I think that’s changed quite a bit now; there’s more margin-walking between the two.”

Being caught between the noise sect’s rock and the (not so) hard place of the folky hoards weighed heavy on Koterwas’s shoulders, almost inciting a premature disbandment during what he describes as a “winter of discontent” last year. But the two factions’ strengthening coalition has developed an attentive audience looking to expand its risk-based approach to sound consumption. Today, The Foundling Wheel’s fare has never been higher.

“I think the surroundings have become more accommodating,” explains Koterwas. “I’m probably on the very harsh edge of an experimentalism that’s becoming more mainstream in Edinburgh. There are people who really like what I do, then there are people who clearly don’t, or just don’t know what to make of it, and where they stand is apparent on their faces when I play. In some ways that’s deliberate, that’s the way I approach music - trying to mix extremes.”

By actualising the sound of urban decay and smashing it deadweight into unprepared lugs, The Foundling Wheel’s 2008 debut LP was an agitated, abrasive clang that screamed ‘acquired taste’. Now hip with the in-crowd — he's part of Edinburgh music collective Bear Scotland, has recorded local wailers Dead Boy Robotics and organises collaborative shows under the VERSUS tagline — Koterwas is determined to ensure his future endeavours won’t succumb to the mainstream bear-trap:

“I would love to be adored by millions of people but I’m not willing to pander to make that happen,” he declares. “I don’t want it to pull me in a direction that I don’t consider authentic. I’m interested in music as an art form and I want to make music that pushes the edge. The best definition of success I can think of is gaining the respect of my peers.” 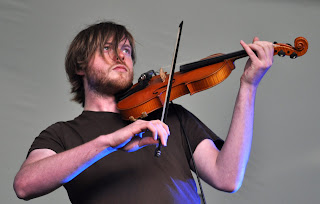 You only need one peek at tonight’s undercard to gauge the heights Broken Records have scaled. Twelve months ago a verbatim line-up would have seen My Latest Novel skyscraping the Queen’s Hall billing. But here, in the heart of the annual Auld Reekie festivities, the Glaswegian outfit have to make do with warming up the cockles of a sardine-squashed crowd eagerly awaiting the 4AD-signed septet’s arrival.

Not that they care, mind; their dewy-eyed laments rise into the venue’s echoic rafters with an intensity that suggests they’re playing to an audience lofted far above these climes. Much of this shortened set gravitates around the magnificent Deaths & Entrances LP, with the luscious I Predict A Ceasefire underlining a dedication to pristine pop melodics. But their reticent scuffling is overshadowed by the assault that bookends Dear Green Place, disintegrating the track’s softened undertones with a ferocious collision of post-rock glory.

After the unexpected insurgency of My Latest Novel, Broken Records' Balkan-infused trinkets contain the reassuring presence of familiarity. Many moons have passed since Good Reason and If The News Makes You Sad... reverberated around Edinburgh’s underground begging for grander stages, and now they’ve got them they sound, well, quite magnificent, the band writhing in instrumental unison to each cut’s full-throttle throes.

That said, for those who witnessed the group ramshackle their way through dingy sweatboxes the reality was always going to be hard to take – Broken Records are now a professional band, with professional songs. The hair-slick execution of takes from Until The Earth Begins To Part bears all the hallmarks of a group on a mission, ironing out past mistakes whilst also dispersing the graciousness of old.

Yet, all is not lost. In Jamie Sutherland’s room-filling bellow, Broken Records possess a voice that can knock grown men floorwards, while the accompanying clash of instrument – now finely honed and purposeful – sweeps them into a crashing melodic sea. By no means the rampaging force they once were, the band's aches from receding indie-credibility have been appeased by a nevertheless swelling fan-base. And as the thundering applause greets Slow Parade’s finale, Sutherland’s gnasher-filled smile says it all: this is exactly where Broken Records want to be. 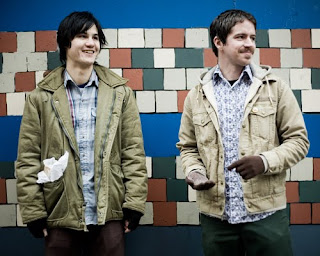 Riding through London in the back of a black cab, The Dodos’ Logan Kroeber has to get to yet another meeting. With album number three Time to Die just about to drop and a full scale European tour to be organised, it’s hardly surprising the skins-man from one of last year’s buzz bands is hurtling around like a decapitated fowl. After all, it was only twelve months ago the San Francisco outfit released their Visiter LP to rapturous acclaim.

“Our approach was a little bit different because we’d toured Visiter for so long,” says Kroeber as he explains Time to Die’s swift turnaround. “We were obviously aware that we had to write the next record and we knew there was a certain amount of pressure but I think we succeeded in being able to create a record that doesn’t sound rushed. We had an awesome opportunity to just be home and write music for two months and not let it affect the sound.”

Despite Kroeber’s assurances, the shift in The Dodos' sonic persuasion has been high on the minds of fans. Composed entirely by Kroeber and long-time confrere Meric Long, Visiter was a gauzy trickle of barefaced folk-pop that struck a chord with the more psychedelically attuned. Compared to Visiter’s strained out ingredients, Time to Die is as thick as pea soup; a thrusting burst of peeling harmonies and forceful melodies finished off with glossy production.

“It’s interesting hearing peoples’ perceptions of Time to Die,” says Kroeber. “Some people think of it as a step away and some people see it as similar. I guess I was in too much of an insular position to really consider it. We’d recorded a lot of Time to Die before Visiter had actually been released so it all made sense to me, but now that the record’s being shown to people I’m starting to realise that people can view it very differently.”

One of the most distinguised changes since Visiter has been the full-time addition of vibraphonist Keaton Snyder. But before fans blame the band’s directional shunt solely on their newest recruit, Kroeber’s eager to explain that Snyder’s role in the creation and recording of Time to Die was only fleeting.

“I think we’re only just beginning to tap into what the actual new band dynamic will be,” says Kroeber with a hint of excitement. “Meric and I had the batch of songs when we met Keaton and we were looking to finalise the vibraphone parts. It was a learning experience working with him and seeing what the instrument is capable of. Now we’re finished Time to Die, we’re working on new songs to see where we can go with these and maybe change the structures a little and push forward.”

Technically cute and rhythmically slow-burning, Time to Die undoubtedly lacks its predecessor’s earth-toned immediacy. Yet, given a little nurturing, the record’s gnarly guitars and pounding drum entwine to reveal a band intent on hitting its creative zenith. Rather than a step-back, Time to Die could be the record that finally puts hairs on The Dodos’ furless chest.

“I think we’ve reached a weird little plateau of maturity,” says Kroeber. “With the new material we’re going to explore a territory that’s more rhythmically weird. Musically, I think there’s a lot more that can be done and I’m really excited by what we think we can achieve. Any motherfucker can get lucky out there – I guess the question is can you keep it up?”

First published in The Skinny

Posted by Billy Hamilton at 21:36 No comments: 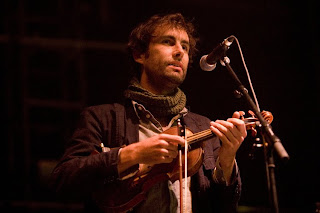 An expert in both violin and verbosity, Andrew Bird is cut from a peculiar musical cloth. His idiosyncratic stylings make him the perfect accompaniment to Edinburgh’s artistic melee and the densely populated Picture House suggests a five-star showing is about to unravel. Atop a stage quilted with a double-ended gramophone and an immaculately attired stuffed toy, the Chicago-born crooner saunters through his back catalogue with the application of an eagle-eyed beaver; meticulously looping whistle, strum and pluck into a blushing conflate that’s accentuated by Bird’s broadened tones. Despite such attentiveness, cuts like Oh No and A Nervous Tick Motion... sound queerly foreign as the ever-progressive Illinoisan carves out fresh pathways for their familiar chords. And god does it work: Anonanimal and Fitz and Dizzyspells shiver with new-found vigour, while an impromptu 'Dr Stringz' proves the evening’s unconventional apex. An oddity for sure, tonight Andrew Bird is freakishly good.
Posted by Billy Hamilton at 21:32 1 comment: