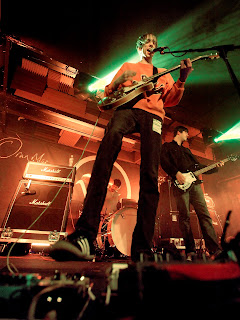 If you can judge a band by its audience, then Deerhunter have come a very long way. A few years ago Bradford Cox’s crew would have been coddled by a harem of skinny-fit hipsters, all scratching bearded chins while basking in their own sense of self-worth. But the punters flocking to Oran Mor’s decadent surroundings are of an entirely different ilk. Tonight’s demographic is a melange of the young and the old, the bald and the mohaired, the hip and the hipless. Somehow, amidst all the hype and all the controversy, Deerhunter have become a band of the people. In fact, make that many people.

In terms of aspiration, support act Lower Dens seem focused on re-enacting the rise of tonight’s main draw. Trudging on to stage with the kind of demoralised apathy you’d expect in a Lib-Dem campaign room, the Baltimore quartet roll out ice-glazed melodies with stoic determination, if little charisma. Wheezing with slouching guitar and lolloping bass, each misty effort tumbles along like airless Beach House off-cuts, led by Jana Hunter’s codeine mew. To put it simply, if Deerhunter were to reproduce, this would be the result.

At their best, Lower Dens skilfully architect waves of dreamy psych-pop. When Hunter’s tender intone rises above the rainbow-coloured washes of instrumentation, she apes a bong-struck Patti Smith ; part tortured gnarl, part wistful purr. Yet nesting within these highs are the sort of ambling, monotonal chords and dreary atmospherics that causes ripples of discontent in a steadily expanding crowd. Despite the lulls, this rosy-cheeked, ambitious outfit have done enough to prove they have the ammo to turn out a formidable live show. Sadly for us, it’s just not tonight.

Thankfully, our headliners have no such worries. Led to the stage by the towering Cox, Deerhunter’s arrival is greeted with the kind of reception reserved for those of a much grander stature. But, right now, the Atlanta four piece are very close to being that kind of band. The ear-pleasing effect of last year’s Halcyon Digest resonated outside muso climes; its retrograde sways coaxing in an audience more taken with jaunty, foot-stomping melodies than grass-chewing stoner dazes. Sure, the record is nuanced with typically intricate flourishes, but the up-tempo tones carved out a new direction and brought with it a swell of late-coming admirers.

As if to counteract this new found devotion, Cox kicks off proceedings with a freshly written number (so fresh it was apparently penned in soundcheck). Temporarily entitled ‘Glasgow 90’, the three minute rush of crunching guitar and guttural drums sets a fast pulse that rarely settles for the next hour. This is not the languid, pavement-gazing Deerhunter of Microcastles and Cryptograms. No, tonight, Deerhunter exude aggression, as if an ethereal veil has been lifted to expose a rabid, snarling mongrel of clattering, grey matter-gnawing sound.

Of course, the most rousing and immediate moments are laden with hooks. ‘Desire Lines’ is a pirouetting whirl of sunblushed tune that soars skywards with spine-tingling optimism; ‘Memory Boy’’s punching rhythm rattles out as a beat-up rock‘n’roller; while ‘Nothing Ever Happens’ is an electrifying neo-punk epic that has Cox teetering on the brink of the crowd while rampant swathes of acid-stained distortion buzz from stage. It’s a thrilling, heart palpitating ride that, at times, finds Cox in the unseemly and rather curious position of knife-edged rocker.

For all this boisterous musical girth, the tender-hearted flurries pull hardest. ‘Agrophobia’s quilted guitar flecks make a gorgeous, quilt-covering encore and the immaculate ‘Helicopter’ is equally lush, melting into a blur of glooping melodic strains. But twinkling reverie ‘He Would Have Laughed’ is the real knock out. Building on a rhythmic gallop of percussion, its tautly plucked notes rise into a jaw-plunging kaleidoscopic trip that eventually topples under its own weight as Cox croaks “I don’t need nobody on my bond” with crippling despair.

Such a sonorous climax highlights exactly where this mesmerising ensemble sits in 2011. Make no mistake, this is a band at the height of its musical powers; a band not scared to push beyond comfort zones or boundaries. And while the crowd may stretch from far and wide, tonight they stand together in unison, singing from one rhapsodic hymn sheet: Deerhunter’s.

Lost down a blackened alleyway that opens on to Edinburgh’s Old Town, The Store is an uninviting kind of venue. Adjective-wise, words like dank and dingy often tip the tongue when trying to describe this cavernous hovel - once you’re downstairs, it's easy to see why.

Yet, behind the murderous exterior, there’s a definite pull to the place. Its numerous name changes over the years may have hindered its reputation, but it always exudes the whiff of a cultural hub; a space where shadowy creatives meet in shadowy surroundings.

As if to underscore the venue’s off-kilter ethos, tonight’s acts all bear a reputation for pursuing somewhat unconventional avenues. The roster of Dead Boy Robotics, Vasquez, Enfant Bastard and Esperi may not ring a bell with pursuers of the city’s more arable melodies, but for those of an avant-garde disposition tonight’s billing brings together an intriguing clash of sound and style under one low-lying roof.

First to the fore is Cammy Watt, AKA Enfant Bastard, who conjures up a typically untypical set. In days gone by, ‘Bastard showings were erratic affairs, with Watt prowling the stage, Gameboy clasped in hand, while a squal of bitmapped beats scarred the airwaves and the eardrums. Yet, tonight, there’s a distinct aura of calm to his movements. It’s strange - perhaps even presumptuous - to say it, but this once untameable pupil is turning into an A-grade achieving prefect.

Isolated behind an industrial effects kit, Watt weaves Nintendo bleeps between tectonic plate juddering house and sharp shooting electro-blips. While this microchip-skewering approach is never going to burn up the charts, there’s a definite lust for floor-packing melody tucked away in these infectious, bolt-loosened cuts. Sure, Watt’s rudimentary tech screw-ups still exist, but this cohesive, limb-mangling spectacle reinforces his credentials as Edinburgh’s most beguiling musical innovator.

Compared to Enfant Bastard’s head-battering fare, Esperi’s down-trodden appearance requires a little readjustment. Initially, the Glasgow trio’s whispering of strings and acoustic guitar are barely audible, drifting out as tender lullabies that droop eyelids with diazepam effect. But, once the musical toys come out – and there are A LOT of toys – a dramatic transformation unfurls. Suddenly, this is a band with purpose and aspiration. A band you can’t take your eyes off.

At times the stage resembles a pre-school crèche; bells decorate the floor, a wind pipe howls through the air, clockwork animals chirp out nursery rhymes. Visually, it’s irresistible. Musically, it’s incomparable to the pastoral folk that blew from stage five minutes before. Frontman Chris Lee-Marr is at the core of this creative resurgence, looping complex rhythms into a tightly bound tapestry that beds his wistful crow. On record, Esperi are lost to the flatness of audio formatting, but here, as they climax dramatically on a flush of drums, they’re an absolutely arresting proposition.

Local boys Vasquez are innately more basal than their stage predecessors. Tooled up with guitar, bass and drum, the instrumental trio chomp at the jugular with a series of thrashing cuts that swing between barbarous metal and hexagonal math noodles. It’s ferocious, testicle-retracting stuff that hurtles along like some sort of demented, wild-eyed coyote slavering for its prey. Yet, for all the cyclonic endeavours, there’s an occasional lack of bite to their bark as they pummel on through without fear of shifting speed. For the most part, it’s a relentless and entertaining romp, but sometimes, just sometimes, a band like Vasquez could cause bigger ripples by slowing down once in a while.

Fortunately, headliners Dead Boy Robotics (DBR) have few problems with impact. Fresh from reeling in a new member - Lady North/Dupec skinsman Paul Bannon - and with album number one on the way, the hip-slinging electroneers are finally on the cusp of fulfilling their potential. As their first showing of 2011, tonight is a first chance to get in gear and dust down the studio’s cobwebs. Instead, they choose to blow them away.

Differentiating between DBR tonight and that of two years ago accentuates the strides they’ve made. The rhythmic tautness that intermittently appeared in their once-capricious live outings, now underpins their sound, with tribal percussion rumbling through hyper-rackets like ‘As Children We Fear The Dark’ and new single ‘Ever’. So much for the ineffectual scene-band of yesteryear. DBR Mk II are all about tomorrow.

Bannon’s apoplectic drumming brings welcome cohesion to DBR’s complex structures. His added brawn gives band foremen Gregor Macmillan and Mike Bryant space to explore, both vocally and melodically, instilling fresh drive through their nocturnally-glazed numbers. Macmillan, in particular, takes the freedom in his stride; roaming the floor while yelping doggishly into his mic as aching blasts of guitar fizzle through the room.

At times it could be the sound of Liars caught in an electric-storm; the din of bass and synth clatters around the air before thumping down like a leaden piped assault. By the time closer ‘Danger Diamonds’ has screeched its final screech, The Store is pleading for mercy, ears bleeding and temples pounding. Dead Boy Robotics may have stopped for now, but you get the impression they’ve only just started.