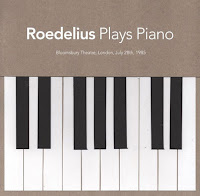 If every piece of music has its place, then Hans-Joachim Roedelius’ Plays Piano fits neatly into the background. That may pass as a compliment struck with a firm backhand, but it's exactly how the Berlin-born kraut rock luminary intended it.

Originally scored in 1985, this 24-part piano séance finds Roedelius gliding through deftly-executed scores that flutter between poignant, tear-stained balladry and giddy flushes of ivory tinkling. Thoughtfully crafted, Roedelius’s seamless compositions won’t strike a chord with those expecting a quick, virulent hit. Instead, it takes time to absorb; slinking through silent spaces almost unnoticed, before threading into the ear canals as a work of lilting beauty.

Pushed immediately to the fore, Plays Piano’s nuances will pass most by as unremarkable background filler. But given time to simmer in the right setting, this is a hypnotic, stirring recording that reaches into places not even Roedelius would have imagined.