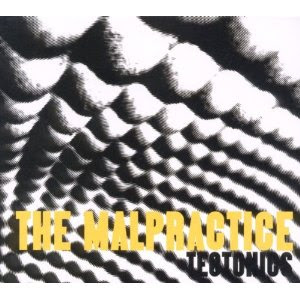 Trent Reznor has a lot to answer for. Not content with making it acceptable for emaciated, eye-liner clad teens to screech “I want to fuck you like an animal” at passer-bys, the godfather of mid-Nineties goth had more than a helping hand in guiding impenetrable shock-rock Marilyn Manson onto MTV’s radar. Even today, almost 20 years since Nine Inch Nails’ masterpiece The Downward Spiral, Reznor exerts considerable influence over the music industry; his every word doted upon by a slavering soiree of labels, hacks, fans and bands. Bands much like The Malpractice, in fact.

Of course, this isn’t necessarily a bad thing. Gammelby is more than adept at sculpting dark compositions. In fact, when he lets go, unshackling from his Reznor-inspired shtick, he proves an elegant, almost elegiac songwriter with an innate understanding of structure and curious pop hooks. But this capacity for originality is often undermined by an inability to step away from his influences; too timid to stretch his own unique ideas beyond a cluster of tracks before reverting back to the sanctity of someone else’s musical bosom.

Album opener ‘Agitator’ is a prime example of Gammelby’s self-imposed limitations. A well executed slice of dramatic electro-doom-rock, the whispered vocals and jarring, stalker-like atmospherics are straight out of the Downward Spiral cutting room. Likewise, ‘Spasm’s turgid guitar chugs and animalistic chorus smack of Pretty Hate Machine’s hip thrusting libido, while the maximalist production and jarring slow-motion riffs of ‘Fault Lines’ rattle out like some sort of bastardised Manson prototype without the ambiguity or balls-to-the-wall bravado to pull it off.

Simply put, Tectonics is at its most intriguing when Gammelby strays off-piste. ‘Boss Stallion’ is a wiry guitar pop blast that threatens to take off into an infectious, liberating singalong; ‘It’s All About Love’ pendulums between hushed beauty and skyscraping, eardrum-mauling sonics; and album high ‘We, The Drowned’ sets out as a brooding, bassy malaise before escalating into a writhing, scratching mass of guitar and drum that has Gammelby screeching: “Please just leave me the fuck alone, I’m not coming out to play.”

Yet, despite these peaks, it’s troughs like weak-limbed thrash ‘Oh, The Irony’ that ultimately let the album down. By dipping a sticky paw into his record box of influence, Gammelby has only succeeded in creating a sense of inconsistency that does too little to merit repeat listens. You can blame Trent for a lot of things, but as Johannes Gammelby is likely to find out, you can’t blame him for everything.